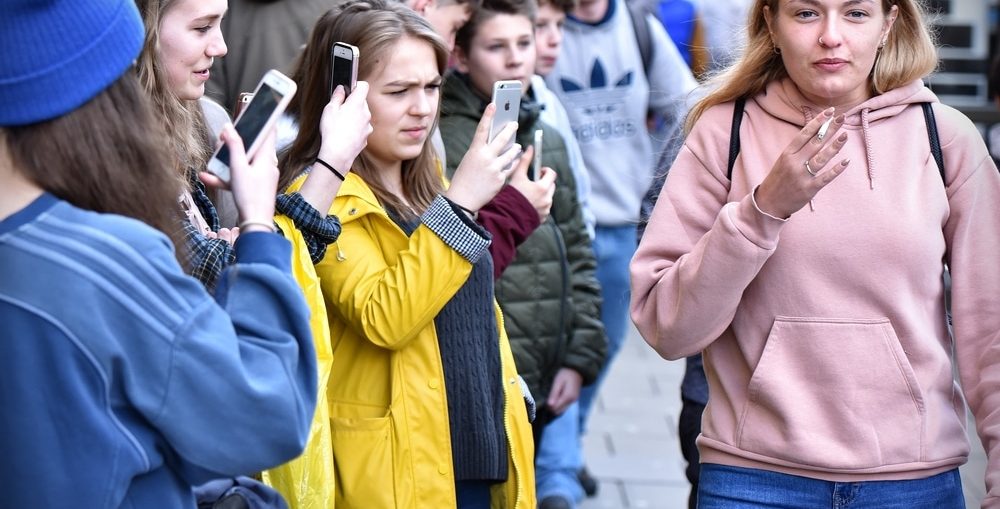 A small sampling of teens was used in a new study that found cannabis retailers aren’t adhering social media restrictions by the state.

In the Journal of Studies on Alcohol and Drugs recently and online on January 19, and found that many recreational cannabis companies market their products in a way that appeals to children and teens, “flouting state regulations.” A press release was released the following day.

The study, “A Content Analysis of Cannabis Company Adherence to Marketing Requirements in Four States,” provided an analysis of social media posts from cannabis companies in a handful of legal states.

A team of researchers evaluated one year of publicly displayed posts on Facebook and Instagram by retail cannabis companies in four states—Alaska, Colorado, Oregon and Washington—and evaluated if companies adhered to restrictions on social media.

They also checked for required warnings from companies, such as advising that marijuana is only available to 21-year olds or older and not allowing impaired driving.

Only 14 companies were included in the analysis. To be precise, researchers evaluated 2,660 posts from these 14 businesses.

“I had expected that cannabis companies were unlikely to fully adhere to existing guidelines,” said lead author Megan Moreno, M.D., M.S.Ed., M.P.H., division chief of general pediatrics and adolescent medicine at the University of Wisconsin-Madison. “Some cannabis companies generated dozens of social media posts per day, and there is no current system in place to monitor or enforce these regulations. However, it was surprising to see how the presence of guidelines made a difference between states.”

Research found that around 35 percent were in need of discounts and promotions. “Overconsumption” was found in 12 percent percent of all posts. Content containing warnings, “despite being required,” researchers said, were evident in less than half of all posts.

Researchers noted, for instance, that Washington State prohibits the display of logos on T-shirts. However, they discovered that just 1% of social media posts by Washington cannabis companies did not comply with this prohibition.

The research team did admit that “in states without this regulation, these types of posts appeared between five and 10 times more frequently. So while regulation did not guarantee compliance, it seemed to have an impact on how often companies shared content that may or may not be restricted.”

“As a pediatrician, I know that marketing and advertisements have a strong influence on kids and teens,” said Moreno. “Previous studies have shown how alcohol and tobacco companies’ marketing is associated with youth using these products.”

She continued, “Parents should talk with their kids about how cannabis companies seek to influence them by using youth-friendly approaches, like using cartoon characters and memes.”

FOX23 News in New York and ABC10 New York picked up the study at time of writing.

Both Facebook and Instagram fall under the Meta umbrella, and we can’t help but wonder if studies such as this impact Meta policy. “I don’t think the results of this study have any impact on Meta censoring cannabis brands because they justify their actions by saying cannabis is federally illegal in the U.S. and therefore not allowed anywhere in the world, even in countries where it’s federally legal, like Canada,” ADCANN CEO Cody Hicks told Chronic News. ADCANN provides cannabis marketing tools, such as how to restore an Instagram account if it’s been disabled because of cannabis.

If legal cannabis companies are targeting teens, it doesn’t appear to be working. The Independent, broad-based study was published in JAMA Pediatrics—using data from national and state Youth Risk Behavior Surveys from 1993 to 2017, researchers from Montana State University, University of Oregon, University of Colorado–Denver and San Diego State University—examined states that had legalized medical and adult use cannabis and the likelihood of teen use (during the past 30 days).

Data from 27 states, including the District of Columbia, were used to analyze this study. The data also included seven states in which adult marijuana use is permitted, over a time span of 25 years. Eight percent of adult-use marijuana laws are associated with the study. DiminutionIn the probability of teenagers trying marijuana, there is a 9 percent ReduktionThe study showed that frequent use of cannabis increases the likelihood of addiction. It was found that teens did not use cannabis in any significant way because of medical cannabis laws.

Halloween is the most popular time to see headlines about cannabis and children. In both clinical and unclinical cannabis research, there are many biased reports about cannabis’ harms or benefits.