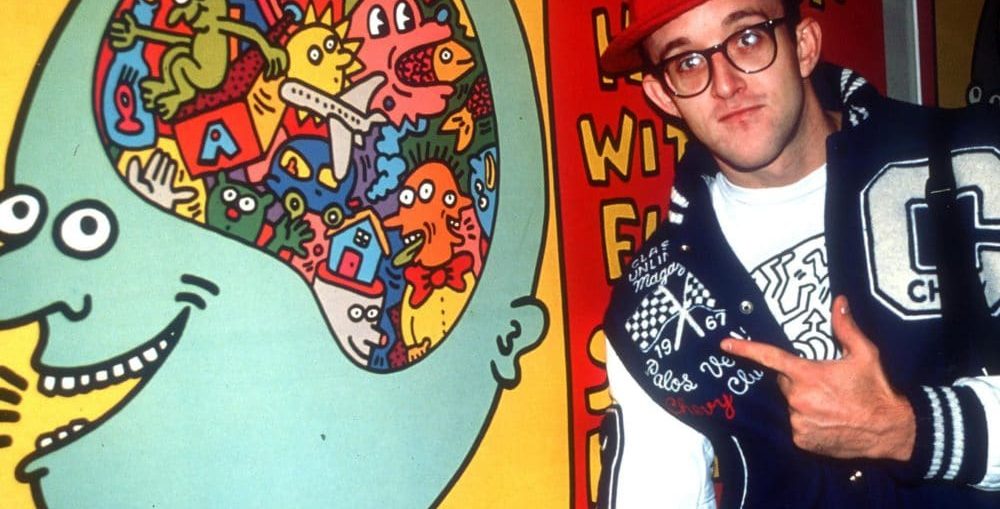 Social activism was built into the art of Keith Haring—one of the most widely recognized modern artists of our time. From promoting AIDS awareness to being vocally against apartheid and other issues, Haring’s art nearly always carried a message.

Haring rose from “street art”—courteously drawing with chalk instead of paint on New York subway cars, to producing art that auctions off for millions of dollars. Haring’s 1982 Untitled, for instance, auctioned for $6,537,500 at Sotheby’s New York in 2017. It’s the dream of any aspiring artist.

The Keith Haring Foundation partnered with Greenlane Holdings and retailer Higher Standards to unveil the K.Haring Glass Collection—with functional art depicting some of Haring’s iconic figures and designs. A glass art collaboration was a natural choice, given Haring’s importance to cannabis, according to some of his close associates.

“I think that what we try to do with our licensing program is we try to tell different stories about Keith,” said Gil Vazquez, executive director of the Keith Haring Foundation based in New York City. “We thought of this collaboration as a way to tell the story about Keith as a weed smoker and as someone who partook in smoking weed as part of his life.”

So yes, Haring not only smoked cannabis—he preferred it. But as a workaholic, Haring knew how to time his indulgences in a way that didn’t slow down his output of art.

Vazquez continued, “He would very often smoke after he painted, never before. After he had finished painting, he would light up to admire the artwork for a bit. Truth be told—it was kind of a therapy for him as well.”

Vazquez, who is also a producer and DJ, was a very close friend and confidante of Haring—frequently speaking at events such as World AIDS Day. His foundation, the Keith Haring Foundation was created to continue and grow Keith Haring’s work and legacy.

Keith Haring: Who are you?

Haring was born on May 4, 1958 in Reading, Pennsylvania to parents who described themselves as “disciplinarians.” His father Allen Haring was an amateur cartoonist.

Haring was an early talent in art and made T-shirts as a teenager with anti-Nixon slogans, Deadhead-inspired artwork and other designs.

Haring’s first solo show of art was at the Pittsburgh Arts and Crafts Center in 1978. One day, Haring was nearby and noticed a piece of paper on the floor that read, “God is a dog.” The other side of the paper read, “Jesus is a monkey.” Haring said that he can’t explain why, but it triggered what he described as a punk rock attitude inside of him. He was certain he must go to New York.

Haring also moved to New York from Pennsylvania in the same year as he started studying at The School of Visual Arts. He made many close friends in New York with the future icons Jean-Michel Basquiat and Madonna. He also became deeply involved in punk and hip-hop subcultures.

Haring hung around at places like Club 57, at St. Mark’s Place, in the basement of a Polish church, which evolved into his hangout, where he could do whatever he wanted.

On his own, he noticed empty black spaces on the subway—that seemed like they were beckoning him to draw on. Then he took out some chalk to start drawing. First, he saw negative spaces everywhere. It’s what some artists call Horror vacui, Latin for the fear of empty space—meaning a compulsion to fill open spaces with drawings and patterns.

“The street was a very important inspiration for Keith,” said Vazquez. “The subway drawings were a way to get art to the people—people that wouldn’t go to galleries and museums on their own. This was because he saw these empty advertising spaces as a great way to express something. To draw something very quickly with chalk—parallel to what was going on at the time, which was graffiti, using spray paint directly on subway cars. He got his inspiration from there. [scene].”

Like most other artists inspired by the street, he wasn’t always accepted. “Early on, he was viewed quite suspiciously by the graffiti writers at the time,” Vazquez said. “Until he earned their respect. He got up and did what he could to earn their respect. His visual language was quite simple compared to the wildstyle of the day.”

“They had to respect how ubiquitous it was. He was up on every station in every borough,” he said. “Not only that, but he was doing stuff in galleries. He was an unstoppable, tireless worker. I think the street was a huge inspiration for what he did and how he went about his business.”

Vazquez described Haring to be a magnet for leaders in music, art and entertainment such as Basquiat or Fab Five Freddy. “He really attracted like minded people and various kinds of energy,” Vazquez says. “[Fab 5]Freddy was one such person who served as a link between downtown and uptown. Keith really made his home in Manhattan. It was amazing to see the fusion of so many different cultures in the 80s. It was the fusion of punk and hip-hop cultures. This was a very unique period, as these movements were still in their infancy. The people who were dictating hip-hop and punk rock were 14-year-old kids.”

Haring’s canvas was wherever he felt like—be it subway cars or blank advertising spaces. Haring was able to combine minimalism with childlike spirits, which is a rare ability. With petroglyphs, such as the Trickster coyote or Kokopelli, his dancing figures seem to have tapped into an primordial state. Haring was regularly arrested. However, his use of chalk meant that cops often got confused. They eventually let Haring go.

Haring later began to print designs on buttons. Haring was fascinated by reprinting popular art images over and over. Haring was a subway artist for several years, until the media started to notice.

Haring worked with fashion designer VivienneWestwood. Westwood transformed a collection from Haring’s drawings into textiles to create her 1983-1984 Witches Autumn/Winter 1983-1984 Witches collection. Haring’s friend from his New York circle, Madonna, wore a skirt from the collection, most notably in the music video for her 1984 song “Borderline.” (To this day, Madonna remembers her friend Haring on World AIDS Day on Instagram.)

It was around that point that Haring blew up—and he blew up in a big way. Haring appeared in the February 1984 issue. Vanity FairAs well as the October 1984 issue Newsweek.

Activism in pressing social issues was at the core of Haring’s work. Haring appeared in more that 100 group and individual exhibitions. Haring also produced over 50 public murals.

“He would very often smoke [cannabis]Never before had he ever smoked after painting. To look at the paintings, he used to smoke right after painting. Truth be told—it was kind of a therapy for him as well.” – Gil Vazquez

Haring was in a complicated relationship with drugs and eventually opened his heart to the possibility of pursuing a career as sexologist. Rolling StoneOne of his final major interviews, in which he spoke about his experiences using psychedelics at the age 16-year-old mark, was about his personal experience with them.

But when crack cocaine became an obvious detriment to American society in the early ‘80s, Haring sprung into action. Haring’s friends mention that he tried nearly every drug, but obviously he could recognize which drugs should be avoided. Haring lost many friends due to overdoses.

“Crack is Wack,” one of his most recognized murals, which appeared in 1986 on the handball court at 128th Street and 2nd Avenue, was inspired by the crack epidemic and its effect on New York City.

“People take ‘Crack is Wack’ and sort of take that as a blanket to say that Keith was anti-drug,” Vazquez said. However, the truth was more complex. “Keith probably has tried every drug up until that point,” Vazquez said. “His go-to was cannabis. I think the collab is a clever nod to Keith’s weed use and his advocacy for it. Even at the time, it was underground, if you got caught with any of it, you’d be fined.”

In June 1986, he created a banner with the help of children to commemorate the centennial anniversary of the Statue of Liberty’s arrival in America. Later that year, he painted on the Berlin Wall—just as the Iron Curtain was beginning to crack in Germany. Haring had become one of the most well-known artists around the globe by then.

By the mid-80s, Haring’s circle of friends—many of whom were gay—were “dropping like flies.” Drugs that keep people with HIV alive simply were several years away from being developed.

Others died from drug abuse or another cause. Haring wrote Basquiat’s obituary in 1988 after Basquiat had died. Vogue magazine. Warhol also died a year before.

After Haring was diagnosed with AIDS in 1988, he simply started producing art at a faster rate—knowing his art would outlast himself. “I cannot ever think of a time that I heard him complain about being sick, about his condition,” Vazquez asserted. “He was very stoic about continuing to work and really being adamant that he had so much to do. I think that weed helped him through it.”

It was difficult for doctors to fight AIDS back in 1990. Antiretrovirals—drugs that now control HIV very well—hadn’t been developed, for the most part.

“He got the best of everything, including weed,” Vazquez said. “He’d have the top of the top quality that you could get in New York. At the time, I wasn’t a smoker myself. So I didn’t participate, but I was always around, and saw the copious amounts of cannabis that he’d have around. He would share with his friends.”

Vazquez admits that he could picture Haring joining the medical cannabis movement, had he survived AIDS, given the artist’s long history with pressing social issues. HIV, after all, was a major driving force behind medical cannabis.

“So much has happened [since then],” Vazquez said. “The attitude of the country has evolved since when Keith was alive. The underground is so hush-hush. Many people smoke cannabis, yet keep it secret. My goodness, I’m sure he would have been at the forefront of championing the legalization of cannabis as medicinal as it did help him. I’m sure if he were alive, he’d be an advocate.”

After being diagnosed, he had only two years to live. His journals indicate that he didn’t know if he had five months or five years left. Haring was diagnosed with AIDS in 1990 and died from complications.

“Today people are able to live a fairly decent lifestyle compared to back then,” Vazquez said. “If we always lament how the advances in medicine just didn’t come soon enough for Keith to take advantage.”

In 2019, he was one of the inaugural 50 American “pioneers, trailblazers and heroes” inducted on the National LGBTQ Wall of Honor at the Stonewall National Monument in New York City’s Stonewall Inn.

The K.Haring Glass Collection is just one of many ways to keep Haring’s memory alive.

K.Haring Spoon design is in a pipe-hammer shape made from durable borosilicate. It is housed in a box with durable walls and foam inserts, the packaging is embellished with Haring’s signature and artistry. K.Haring Bubbler features an 8-slit percolator showerhead and fixed large bowl.

You can also check out Tasters and Trays as well as Catchalls featuring Haring’s art.

Haring—at least in my opinion—ranks among the other “greats” who we lost to AIDS, including Freddie Mercury, Eazy E, Ryan White and Anthony Perkins.