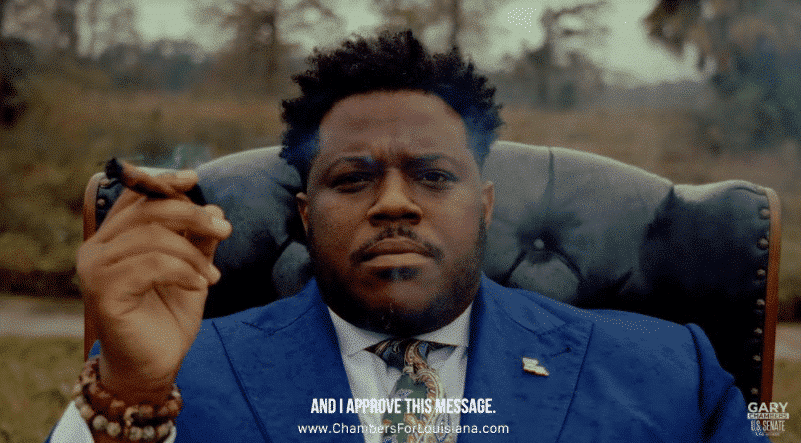 Louisiana’s politician is seeking a seat in Congress. He is showing his personal use of cannabis while also addressing the failures of the War on Drugs. Louisiana Senate candidate Gary Chambers, released the video on YouTube entitled “37 Seconds” to sum up the problems with the War on Drugs and the need for social justice now—all while sitting in a chair smoking a blunt.

“Every 37 seconds, someone is arrested for marijuana. Since 2010, state and local police have arrested an estimated 7.3 million Americans for violating marijuana laws, Over half of all drug arrests,” he says in the video. “Black people are four times more likely to be arrested for marijuana laws than white people. States spend $3.7 billion annually enforcing cannabis laws. Most of the people police are arresting aren’t dealers, but rather people with small amounts of pot, just like me.”

Chambers is confident that he will stand for cannabis users in Louisiana as a senatorial representative. “I hope this ad works to not only destigmatize the use of marijuana, but also forces a new conversation that creates the pathway to legalize this beneficial drug, and forgive those who were arrested due to outdated ideology,” Chambers wrote on social media channels.

Chambers has announced that he will run for the U.S. Senate. January 12She cited the need for reform as her reason. “I’m running for the U.S. Senate because Louisiana continues to be ranked last in the nation. That is more a reflection of our leaders than our people,” he wrote of the current regime. Furthermore, he pointed out that it has been 149 years since a Black man served in the “statewide office” in Louisiana. Last Black man to serve in the “statewide office” was P.B.S. PinchbackBetween December 9, 1872 and January 13, 1873, he was the governor of Louisiana. “Let’s not wait another 100 years before another Black person is elected statewide in Louisiana.”

Chambers is known for his advocacy of social justice. Chambers ran for a U.S. House of Representatives position in March 2021, losing to Troy Carter. He shared his support for both the Harnessing Opportunity by Pursuing Expungement Act (HOPE), and the Secure and Fair Enforcement Bank Act (SAFE).

Chambers’ video is a brief but bold display of the reality of cannabis in a modern age, and the drawbacks that the stigma still perpetuates. However, he isn’t the only politician who has embraced cannabis to appeal to voters.

In 2019, a Illinois House candidate Anthony ClarkWhile discussing honesty, they smoked joint. “I think I have to be just as open about my cannabis use, you know? Because lying to individuals, I think, plays a direct role in enabling status quo, in enabling the oppressors, the top one percent, to remain,” Clark said in an interview. “We have to empower ourselves. Education is essential. I don’t hide this at all. I tell people on a daily basis, cannabis saved my life, it continues to save my life.”

The presence of marijuana is also being used to educate other legislators and help normalize it. To show how small hemp is and what more it could be needed for medical treatment, a Mississippi lawmaker brought a pound of hemp to Governor Scott.

Only January 1, 2022 marked the official start of sales for Louisiana’s cannabis flower. It was approved in 2015 by Louisiana legislators. Patients with qualifying conditions may be approved by their doctor for medical cannabis.